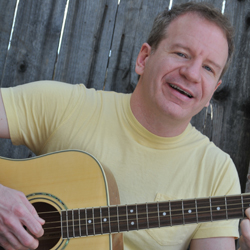 Chuck Pelletier is a Los Angeles singer-songwriter from the Chicago area. He performed in and around Chicago as a solo act and with various bands (The Next Act, CNG, Quote-Unquote). In the late 90’s he moved to Los Angeles, where he continued his solo career as well as writing for and playing with the acoustic rock band JERICHO and the contemporary country bands OFF THE WAGON and THE KAREN VOLPE BAND.

Chuck’s song “All About Me” from the musical the Green Room, won Best Song in the 2005 Songwriter’s Guild of America annual song contest in the musical category. He has contributed songs to independent albums by several bands. He has also written the film score for one independent film (Eyes Of Innocence) and has had songs placed in several other movies including Chasing Indigo (2000), Piling Up Vera (2002), Valentine Man (2004), and ZYZZYX Road (2005).

He has been performing and writing songs since the age of 13, the year he bought his first guitar. Equally at home with either a guitar or keyboard, Pelletier performs music in all styles ranging from folk to alternative to country to rock, but always with an acoustic base.

Pelletier also wrote all the songs on the Karen Volpe country CD, DINNER AND A FANCY DRESS.

Pelletier’s current style is one that, like many traditional and modern folk-rock artists, is driven by its message. His philosophy of writing and performing is to be vulnerable and transparent – to let people see into the writer so that they might see something in themselves.